The sun is an inexhaustible source of energy, available practically without limitations, emission-free and free. Solar energy can be used in many ways, for example to produce electricity using universal solar updraft towers, which can draw on renewable energy sources in many ways.

How does a solar updraft tower produce electricity?

A solar updraft tower is a device to produce electricity from thermal energy, which the sun provides. During the day, the air heats up in a huge solar collector, rises and escapes through a high tower or chimney. The moving air drives the turbines, producing electricity. The sun heats the air in the greenhouse to about 70°C.

A solar  updraft tower consists of three basic elements: a glass roof collector, a tower or a chimney, a wind turbine - a solar updraft tower with collectors can be compared to a greenhouse with a chimney.

The collector is mounted a few meters above the ground, its height increases towards the base of the tower and is made of glass or plastic. The collector also allows the storage of thermal energy by means of black water-filled pipes arranged around each other. Pipes are mounted under the collector and tightly closed. The water in the pipes does not need to be refilled. There are no problems with its evaporation. The efficiency of energy production in the solar updraft tower depends on the size of the collector. The larger the area of the collector, the larger the volume of air is heated and the production of electricity increases. Theoretically, the collector area should be about 3.5 km The heat can be collected under the surface of the collector, where it will be used for the tower's non-solar operation, by giving heat to cool air, forcing it to circulate at night.

The tower is a vertical building structure, loaded with wind in the horizontal direction and gravity load. For the construction of solar updraft towers in the past, long black painted steel pipes were used, old closed factory chimneys were used. Similarly to collectors, the effective operation of a solar updraft  tower depends on the chimney height.
With a higher chimney, in turn, there is a greater pressure difference caused by the so-called chimney effect, which in turn forces a higher speed of air flow. According to the assumptions, the optimum chimney height for a large power plant,
should be about 1000 meters. Increasing the height of the chimney and the surface of the collector will increase the air flow through the turbines, i.e. the amount of energy produced. The disadvantage of solar updraft towers is the necessity to work in sunny areas and to occupy a considerable area under the collector. The areas suitable for construction are those of low value, such as deserts.

Turbine - The turbines driven by the air movement inside the solar updraft  tower produce electricity. The air speed before and after the turbine is almost the same. Wind turbines can be mounted horizontally when connecting the collector to the tower.

The extraction of electricity from the solar updraft  tower was developed by Spanish scientist Isidoro Cabanyes. In 1902 he patented his Air-solar engine to produce electricity from the solar chimney, and on August 25, 1903, in the scientific journal La energía eléctrica, he described the operation of a solar chimney to produce electricity. The solar chimney consisted of cone-shaped panels (basically the first solar collector), which were made of glass and iron frames painted black and a high chimney with a windmill mounted inside. The solar chimney started to work when the air heated inside the collector, rising upwards, was driving the fan, which in turn set the motor in motion. Electricity
was also stored in batteries. The power plant could operate for a maximum of 8 hours, until
Isidoro Cabanyes developed his project over the next period, after numerous improvements in Cartagena, the first solar updraft  tower in the world was built and produced electricity.
Cabanyes, first alone and then with Luis de la Mata, experimented and constructed improved and larger engine models. Together they presented the twenty-metre high model at the Madrid Industrial Exhibition in 1907.

Hanns Günther was a German writer, in his fantasy science book "In hundert Jahren - Die künftige Energieversorgung der Welt" he predicted the depletion of oil in the world and the future of the world will be renewable energy.Hanns Günther in his publications presented a prototype of a solar updraft tower built on a mountainside in North Africa. The Solar updraftTower had collectors laid on desert sand, from the collectors to the top of the mountain stretched an empty tube inside, Hanns Günther claimed that an increasing air speed of 50 m/s could be achieved in the tube, and a huge amount of energy could be obtained from the wind turbines that were installed in the building on top of the mountain. The mountain tower could also act as a vertical greenhouse.

In the 1970s Robert E. Lucier presented his patents for building solar updraft towers.
The patents were purchased by Israel, Canada and the USA. Robert E. Lucier described the operation of solar updraft towers as a device to convert solar heat into electricity by accumulating normally unheated air under a transparent roof. For ideal areas suitable for the construction of solar updraft  towers, he replaced areas with hot air, hot weather, and sparsely populated areas covered with sand, gravel, or rock. The solar updraft  tower was to provide an infinite source of energy at an extremely low cost.

Solar updraft towers in the world :

The German engineer, Professor Jörg Schlaich, has been working on a solar tower project since the late 1970s. With the help of the German government in 1982, his company completed the construction of a solar tower in Manzenares, Castile, 150 km south of Madrid. The plant had a 195 meter high chimney with a diameter of 10 meters. The collector occupied an area of about 5 hectares and the diameter of the greenhouse was 244 meters.
The solar updraft tower had an electrical output of 50 kW. The energy complex operated for eight years. The tower collapsed due to the lack of adequate corrosion protection of the extraction cables installed in the tower. Possible reasons for its failure were air vortex or storm. The power plant was not geared towards commercial profit, it was an experiment on which Professor Jörg Schlaich gained experience.
The solar updraft  tower had a meteorological station, a greenhouse where plants were grown. In 1989 the power station was closed and at a later time demolished.

To understand the whole process of generating energy through the Solar Updraft Tower, a small experiment can be carried out at home. Let's see how the heat from the sun is converted into electricity. Let's prepare thick paper that is best constructed and necessarily black. Black (black heats up faster) Roll the paper up into a cone shape so that the smaller hole is at the top and the smaller one at the bottom. The paper structure must be stable. Then cut out three holes for the air intake at the bottom. At the top of the structure, mount a small propeller with two blades turned 45 degrees down. The propeller can be mounted on a small needle and modelin. The experiment can be carried out in a small room, remember to keep the windows and doors closed inside the room. No wind can get into the room. We will need artificial light for the experiment. You can use the small lamp you have on your table or desk for this purpose. Place the lamp close to the paper structure and then switch on by directing the light to our Solar Updraft Tower. It takes about an hour for the propeller to rotate under the influence of warm air. 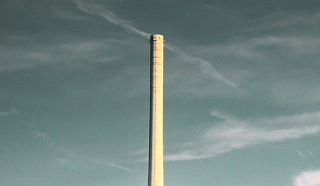 Why are the solar updraft towers and chimneys black ?

The philosophy is simple. The answer to this question can be found in physics and in everyday life situations. The philosophy is simple. For example, a black car heats up more in the sun than a white car. And in the summer? If you wear a white T-shirt, you will be cooler than if you wear a black one. The conclusion from this is that black objects that absorb light of different colors heat up much faster than white objects that reflect light of any color. This is why the solar updraft tower is painted black because it absorbs the sun's rays faster.