The Belgian missionary Ferdinand Verbiest invented the world's first steam-powered vehicle. The design is reminiscent of a small remote-controlled car - a toy really outdid its decade by several years. 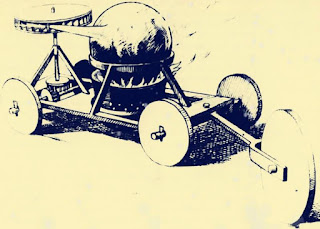 In 1678, Ferdinand Verbiest, who was in China, was involved in astronomy, physics and geography research at the court of Emperor Kangxi. In his spare time, he worked on a small, high speed vehicle he called "the burning wind". On the basis of an invention already known in antiquity - the Aeolipile's engine - he constructed his small invention.

The Ferdinand Verbiest vehicle how it worked and what materials were it made of?

The vehicle was a structure made of wood and metal. The vehicle was 65 cm long and 20 cm wide. The structure had four small wheels mounted on two axles and one larger extended front and set on a long frame. The rear axle driven the entire system mounted on the chassis, and the front wheel was responsible for steering the vehicle. The vehicle had a very primitive steering system. Because the steering was manual and for technical reasons it was a very primitive process. The central point of the entire drive was a hearth located on a wooden chassis and a boiler with water, to which a nozzle-shaped pipe was mounted, from which the steam jet was driving - horizontally positioned above the rear axle - a gear wheel. The wheel, through a simple gear, transmitted the drive to the rear wheel axle. To ignite the fire in the hearth, Ferdinand Verbiest used wood and coal. The vehicle moved at quite a high speed until it ran out of steam or fire. After one filling of coal, the vehicle was able to move for more than an hour.

A toy or something else ?